"Every organisation can become exceptional by developing its potential to innovate"
June 30, 2020 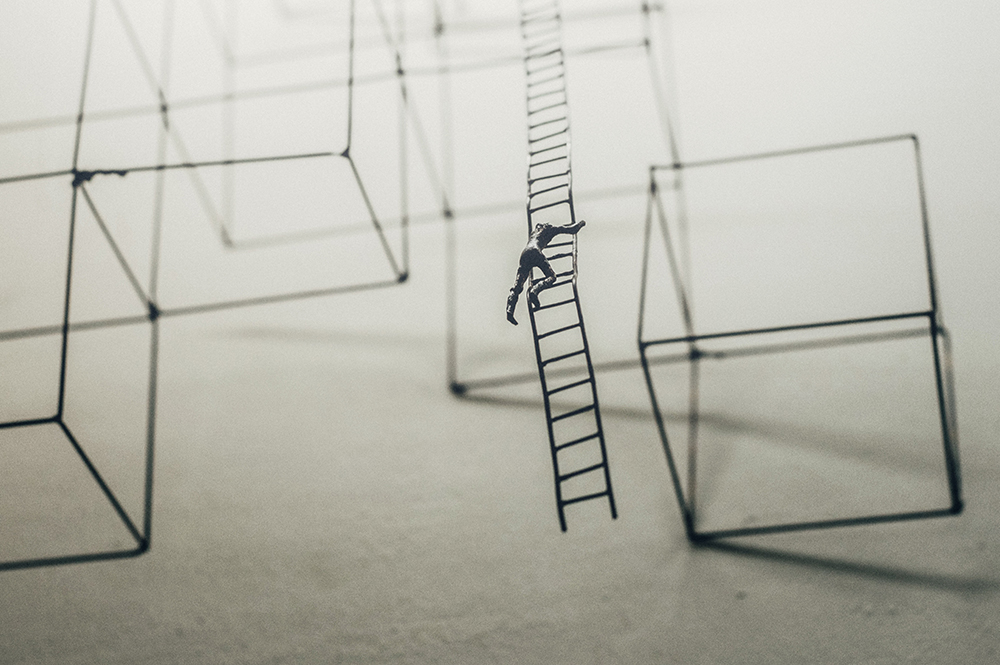 With entrepreneurial successes such as Airbnb, Warby Parker or SpaceX taking over industries, the desire and ability to disrupt a sector via technological design is on the rise.

Digitally advanced startups, entrepreneurs and innovators are disrupting the norm, in an otherwise controlled corporate industry, taking the lion’s share of markets and delivering far superior services and experiences that exceed customer needs. At the same time, every corporate leader hopes they are not going to be next in the interrupted, disrupted or obsolete line, instead, holding tightly to the outdated structures that once allowed them to dominate their market.

Clayton Christensen first proposed ‘The Disruption Theory’ in his book The Innovator’s Dilemma. The concept is that an outsider, usually a startup or entering an established industry and shaking things up; generally with a digitally advanced alternative or subcategory of an existing model. In the process, threatening or even replacing the complacent legacy players (incumbents). Examples of this phenomena infiltrate business, politics and also national security.

The disruption theory has seen its fair share of criticism for being biased towards success stories supporting the argument. However, regardless of where you stand on the disruption theory debate, change is inevitable and constant as the 4th Industrial Revolution unfolds. The fact that Airbnb has a higher valuation than the Hilton group, without owning any rooms (tangible assets) cannot be disregarded. Another example of a digitally advanced extension of a well-seeded business model is the fact that it’s cheaper and more convenient to take an Uber than a conventional taxi. Uber has dramatically revolutionised the taxi industry, disrupting and impacting to such an extent it has caused riots from existing taxi drivers who have been put out of business.

Disrupting an industry means more than just startups gaining market share from incumbents. Disruption is a shift in ‘business-as-usual’. It’s a change in money flows and value propositions. Broadly speaking, disruption squeezes out the inefficiencies and those profiteering from lack of transparency, pushing the industry forward and offering a more convenient, usually digital proposition. Bringing with them new waves of competition to stagnant markets transitioning to Industry 4.0.

The disruption theory serves as both a chronicle of the past and as a model for the future. To build successful companies, we need to develop, educate and allow for entrepreneurs to understand which industries are ripe for disruption and what digital shift will cause a mass change in that particular industry.

Corporate leaders need to understand that if their industry is under threat of disruption they need to deploy immediate countermeasures such as creating an in-house digital corporate innovation capability to protect their market against the new kids on the block. However, when it comes to organisational leadership and culture, what we also can’t ignore is one of our core failings as humans, ‘arrogance’ as that too can prove deadly and disruptive. Arrogance at the leadership level not only acts as a direct barrier to creativity and innovation but almost always proves toxic in terms of the broader organisational culture.

A prime example of someone that understood this was the co-founder of Southwest Airlines, Herb Kelleher, who famously said;

“A company is never more vulnerable to complacency than when it’s at the height of its success”, outlining that the business could not let “success breed complacency; cockiness; greediness; laziness; indifference; preoccupation with nonessentials; bureaucracy; hierarchy; quarrelsomeness; or obliviousness to threats posed by the outside world”

…and that failing to do this was the company’s number one threat.

Unfortunately, many leaders today confuse confidence with arrogance. While confidence can in many ways be considered a positive trait, arrogance is most definitely a damaging one, especially when it comes to organisational culture. Arrogance manifests itself in many of the anti-innovation behaviours like leading through fear, command-and-control, not being motivational or inspirational and not building an environment of creativity, adaptability and risk. When scaled up, the organisation itself can then display similar levels of arrogance and thus open itself up for disruption.

When trying to predict the potential for disruption, there are nine common patterns we typically see that indicate an industry is ripe for disruption:

One of the most critical signs that industry could disrupt is consolidation at the top, manifested through imbalance or dominance by one side of the economic equation. Oligopolies, where a few companies have consolidated vast amounts of the market share on either the supply or demand side, are good examples. Airbnb first became profitable during the second half of 2016, and its revenue grew more than 80% from 2015 to 2016. Coincidentally (or not) in the same year consolidation in the hotel industry started ramping up too. Looking ahead based on this argument, one can conclude that the automotive industry’s legacy business model, i.e. car ownership, is about to be disrupted by new business models. One example is ‘cars-as-a-service’. Consolidation at the top in this sector has just begun with the deal between two arch-rivals Daimler and BMW created for a car-sharing service.

This particular symptom usually happens in industries where the consumer has no other option but to stay with the corporate legacy provider out of necessity and the lack of options. The taxi industry is a perfect example of this stagnation and was precisely the reason that Uber emerged, offering a real, convenient alternative.

Losing customer contact can spell the beginning of the end for some companies. Established corporates can miss the close connection and contact with customers due to lack of digital development, innovation and too much emphasis in areas that deviate away from a customer focus. In an era where data is the new oil, companies that lack this resource or no longer have access to it will severely affect their ability to build new products, innovate and meet evolving digitally-advanced customer needs. An illustration of this being banks fearing that they will only become a provider to Amazon and in the process, lose any hopes of getting any form of customer insight. As an example, Norwegian banks have teamed up to create a mobile payment solution, Vipps. Vipps (a mobile payment application) will allow the banks to stay competitive through customer insight, independent of where their customers have their actual accounts, what they choose to purchase or from where they want to do it.

‘Disrupted = your industry is part of a @CBInsights chart. Dead but don’t know it = mgmt response is “We have a corporate accelerator.”’

This particular pattern is more prominent, but not limited to, industries where, from the point of origin, goods or services exchange multiple hands (middleman) before making it to the end consumer. Generally speaking, the middleman adds low to no value to the end consumer but has a positive impact on the final retail price. An excellent example of this is the mattress industry, where the startup Casper disrupted most of the industry with a direct to consumer business model. To some extent, Tesla did the same to the auto industry using a direct to consumer business model, unlike the other players in the industry which remain stuck in an archaic dealership model.

Industries with high regulation often suffer from complacency. Companies in these industries fail to innovate and improve due to an acute lack of competition which can be rife in the corporate world. For example, many fortune 500 companies have become complacent as they don’t have to worry much about customer experience or optimising operations as in their mind’s eye they have already dominated and won the customer over in their chosen market. Corporations must wake up to and must ensure that there is room for innovation and expansion. Telecommunication carriers have in the past felt safe under the regulatory umbrella and hence have failed to realise how new technologies and devices could disrupt their ‘bread and butter’ products of voice calls & SMS. However, companies such as WhatsApp didn’t fall under the same regulations and have taken advantage of a sleepy industry to render the SMS service obsolete. Whatsapp now dominates the market, offering something that the other telecommunication companies now cannot easily compete against.

Incumbents have legacy IT infrastructures which makes it hard to break the mould. Trying to build a mobile app seems pretty straightforward in this day and age. However, when corporate product teams attempt it, they typically realise how complicated the back-end system is and how negating this necessary detail has stunted the servers potential to grow, allowing startups to infiltrate with their tech-savvy alternatives. Challenger banks like N26, Chime and Monzo pose a real threat to all incumbents because they can build products that customers want without having to worry about legacy infrastructure, breaking the mould at a faster pace with practical technical skills for the digital era.

Organisational and sector arrogance is proven to stifle growth as the perceived superior position overrides the growth mindset and behaviour required for innovation. While we shouldn’t confuse arrogance with confidence, organisations driven by leaders who perceive they are in a business or industry that is somehow shielded from disruption are in reality, operating in a false state of security and thus face challenges that confident organisations don’t.

It’s now well documented and proven that organisational culture is a core driver of performance. With building a culture of innovation, a top strategic priority for many companies, the correlation between corporate culture and innovation capability is stark.

In summary, disruption in every industry is now the name of the game. As the 4th Industrial Revolution unfolds, the opportunity for capitalising on billions of dollars of opportunity is balanced with the reality that 50% of the S&P 500 will be replaced in the next ten years.

Take our 9-question self-assessment OUTCOME IDA (Industry Disruption Assessment). Use the questions below and score yourself from 1-4, 4 being you strongly disagree, 1 being you strongly agree with each question/statement and then check your score against the results below.

Or if it’s easier, use our OUTCOME IDA (Industry Disruption Assessment) card to find out how ripe your industry is for disruption! 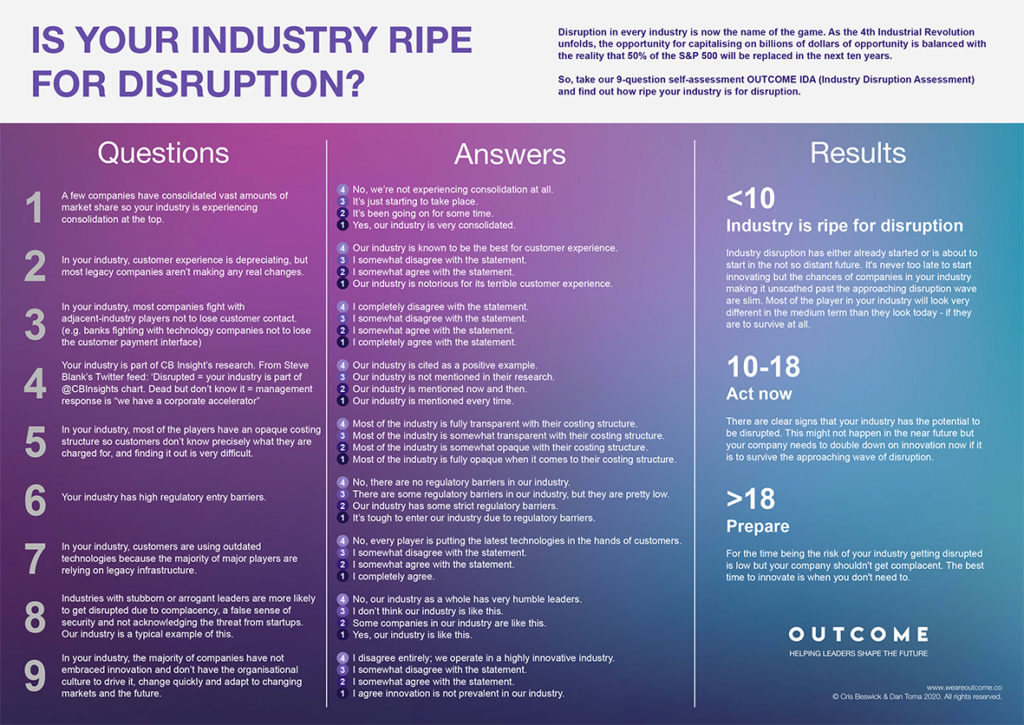 Q1. A few companies have consolidated vast amounts of market share so your industry is experiencing consolidation at the top. [1,2]

Q2. In your industry, customer experience is depreciating, but most legacy companies aren’t making any real changes. [2,3,4]

Q3. In your industry, most companies fight with adjacent-industry players not to lose customer contact. (e.g. banks fighting with technology companies not to lose the customer payment interface)

Q5. In your industry, most of the players have an opaque costing structure so customers don’t know precisely what they are charged for, and finding it out is very difficult. [3]

Q7. In your industry, customers are using outdated technologies because the majority of major players are relying on legacy infrastructure. [2]

Q8. Industries with stubborn or arrogant leaders are more likely to get disrupted due to complacency, a false sense of security and not acknowledging the threat from startups. Our industry is a typical example of this. [6]

Q9. In your industry, the majority of companies have not embraced innovation and don’t have the organisational culture to drive it, change quickly and adapt to changing markets and the future. [7]

Industry is ripe for disruption

Industry disruption has either already started or is about to start in the not so distant future. It’s never too late to start innovating but the chances of companies in your industry making it unscathed past the approaching disruption wave are slim. Most of the players in your industry will look very different in the medium term than they look today – if they are to survive at all.

There are clear signs that your industry has the potential to be disrupted. This might not happen in the near future but your company needs to double down on innovation now if it is to survive the approaching wave of disruption.

For the time being the risk of your industry getting disrupted is low but your company shouldn’t get complacent. The best time to innovate is when you don’t need to.