Changing the organisational climate for innovation to thrive

Hot summers, flash floods, intense storms; it’s hard to escape some of the more immediate impacts of climate change. But there are other impacts too, some of which scientists are yet to understand fully. Take the effects of climate change on permafrost, for example. Acting as a quasi-protective layer between the atmosphere and locked-in carbon deposits deep below, permafrost has a vital role to play in helping to regulate the planet’s ecosystem. But when it goes awry, it can have potentially catastrophic consequences.

A quasi-protective layer which is vital to the ecosystem; does that remind you of anything else? Well, some organisations have applied the same term to middle management; although the popular perception of middle management as permafrost is somewhat derogatory. But just as in a VUCA world you can turn Volatility, Uncertainty, Complexity and Ambiguity on its head to be Visionary, Unbounded, Creative and Authentic. The same goes for the perception of permafrost as being unchanging and immutable, which can be transformed into a vision of a role which is vital in energising and driving the innovation engine of the organisation.

From my work with organisations across the globe, I would argue that that is undoubtedly the case. An innovation vision means nothing unless it is translated into reality. And quite frankly, you can make all the pronouncements and great speeches that you like, but they won’t mean anything unless your people are prepared and engaged in the challenge of translating vision into action.

That’s not to say that top-down innovation doesn’t have a part to play. Leaders do have a vital role in not only creating the vision but also sponsoring and enabling the organisation to align behind the quest for creativity. That’s probably why leadership support is seen as the top enabler of innovation. [1] However, when leaders start to ask ‘how do I OWN innovation in line with the purpose and strategy’ they begin to create the context in which innovation becomes a catalyst for change. In the same vein, bottom-up innovation also has a part to play as individuals bring their skills and talents to the development of new ideas, products, experiences and processes. That’s why survey after survey points to the availability of skills and talent as an enabler of, or barrier to, innovation and why 75% of UK CEOs believe their up-skilling programs are effective in supporting innovation and accelerating digital transformation. [2] When people then start to ask ‘how do I CONTRIBUTE to innovation in line with the purpose and strategy’ then you know that the whole organisation is aligning around the pursuit of innovation; uniting to drive change.

However, visionary leadership and skilled individuals are only going to unite in the delivery of something special if there is a mechanism which weaves the individual strands into a contiguous whole. That mechanism comes from the engagement and commitment of middle managers, team leaders and influencers. They are the individuals who can take the initial vision and translate it into actions on the ground, the ones who can create the conditions for the kind of cross-department collaboration which takes two and two and genuinely makes five. And they are the individuals who through their leadership and engagement can create a climate of innovation which permeates the entire organisation. When managers start to ask ‘how do I DRIVE innovation in line with the purpose and strategy’ then you know that the engine of innovation has fired into life.

So perhaps it is time to view top-down or bottom-up innovation as a mere adjunct to unleashing the organisation’s true innovation potential by a middle-out model. It’s more than time, and I would argue that far from being a barrier, middle management has the potential to be disproportionately important to a culture of innovation.

By now, you may be wondering why three words, in particular, have been highlighted in the paragraphs above. Just as the deployment of three simple words can pinpoint your location anywhere in the world [3], so too can these three highlighted words pinpoint the organisation’s innovation status. 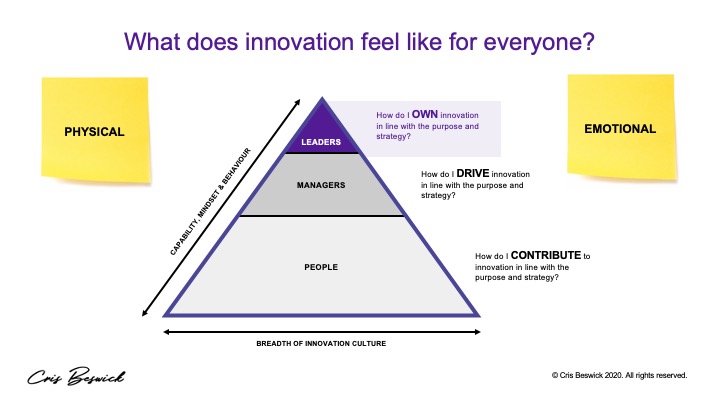 This ODC (Own-Drive-Contribute) framework may look simple, but it encompasses some of the most critical elements of genuinely innovative organisations. What do you need to broaden innovation culture? How do capabilities, mindsets and behaviours weave into delivery? And why is promoting the emotional side of innovation, engagement, empathy and so on, as important as providing the physical tools and structures to enable change? And for our purposes here, the framework also highlights the critical place which managers hold within the innovation ecosystem.

But I will inject a note of warning here. The potential for developing an innovation ecosystem led by managers is dependent on leaders instigating the right climate for change. Leaders ‘OWNING’ the innovation agenda means genuinely enabling managers to ‘DRIVE’ it on a day-to-day basis. Just as in my opening remarks I indicated that the impact of climate change on permafrost could have disastrous consequences for the entire planetary ecosystem, so too can the lack of attention to climate or culture have catastrophic implications for an organisation. That’s why competing priorities, entrenched attitudes, turf wars, and culture all come out as top barriers to innovation success. [1] Quite simply, unless as leaders, you institute a program of active engagement, the very people you need to drive the vision forward are going to be the people who stop it from succeeding.

Yes, it is a VUCA world, at the moment one which is more volatile and uncertain than many of us have ever experienced before. But it is also one which has immense potential for those who are prepared to be visionary, to release the chains of hidebound process, to enable their people to be both creative and ambitious in delivery.

So my challenge to you as leaders is this; if you are serious about transforming your organisation to deliver innovative solutions then take a fresh look at your managers, equip them with skills they need, and engage them in the vision. You might find that rather than a perceived barrier to progress, they become catalysts for positive change. And when that happens who knows where your ecosystem may take you?

If innovation was human…

What kind of VUCA leader are you?

We use cookies on our website to give you the most relevant experience by remembering your preferences and repeat visits. By clicking “Accept”, you consent to the use of ALL the cookies.
Cookie settingsACCEPT
Manage consent

This website uses cookies to improve your experience while you navigate through the website. Out of these, the cookies that are categorized as necessary are stored on your browser as they are essential for the working of basic functionalities of the website. We also use third-party cookies that help us analyze and understand how you use this website. These cookies will be stored in your browser only with your consent. You also have the option to opt-out of these cookies. But opting out of some of these cookies may affect your browsing experience.
Necessary Always Enabled

Performance cookies are used to understand and analyze the key performance indexes of the website which helps in delivering a better user experience for the visitors.

Analytical cookies are used to understand how visitors interact with the website. These cookies help provide information on metrics the number of visitors, bounce rate, traffic source, etc.

Advertisement cookies are used to provide visitors with relevant ads and marketing campaigns. These cookies track visitors across websites and collect information to provide customized ads.

Other uncategorized cookies are those that are being analyzed and have not been classified into a category as yet.