"Every organisation can become exceptional by developing its potential to innovate"
October 13, 2020 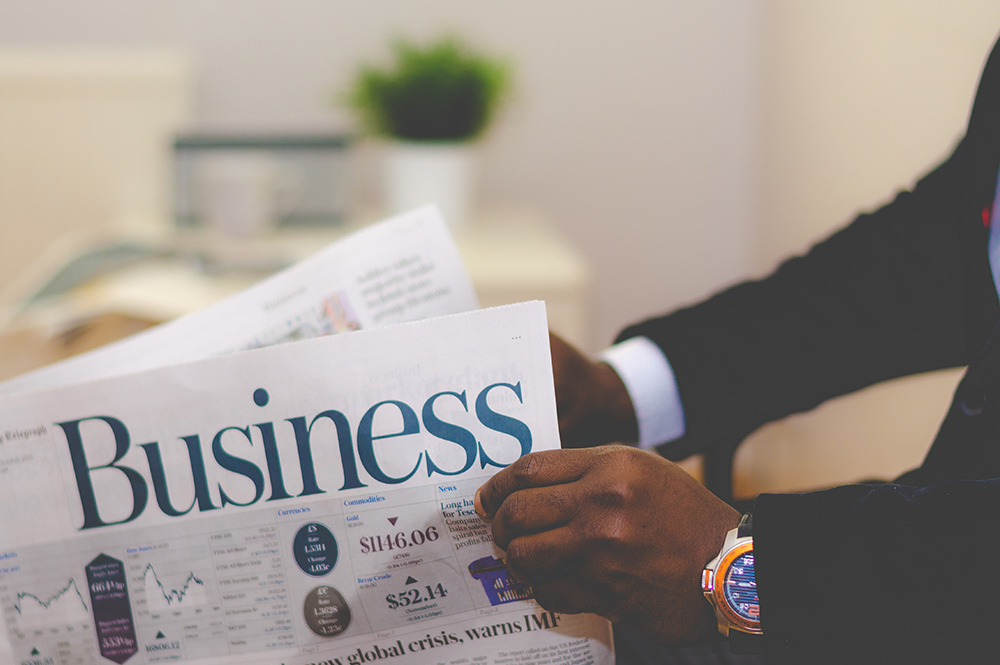 When the going gets tough, where are you to be found? Or is that an unfair question? You might even see it as a knee-jerk reaction to current circumstances, born out of the twin challenges of COVID and the ever-looming end of the Brexit transition period.

Indeed, we can all acknowledge that over the past six months, some organisations have been immensely transformative, responding to challenges in a way which might have been unthinkable just a year ago. As a McKinsey insight article [1] commented:

“Repeatedly, during COVID-19, CEOs have found themselves consulting and coordinating with governments, suppliers, partners, employees. They have been experiencing multi stakeholder capitalism more visceral than ever before.”

More than that, leaders have taken their organisations in entirely new directions; transforming production lines, instigating working from home options, or even wholly remodelling customer interactions and delivery. And yet, we have to ask why it’s taken a global pandemic to energise organisations in this way? After all, leaders have known for years that they had to change their businesses, to become innovative and remain competitive. Back in 2014, I quoted a statistic which said that 72% of prominent UK company directors admitted their organisations were too reliant on fading revenue streams and needed to change. Yet BCG’s 2020 Global Innovation Survey revealed that just 45% of companies saw innovation as a strategic priority and are prepared to invest accordingly. [2]

In the intervening period, I have seen reports which suggested that innovation as a strategic priority was moving up the corporate agenda, with some offering that 100% of executives recognised the importance of innovation as a driver of required outcomes. Where the BCG report differs is that it links recognition of innovation as a strategic priority to spending on innovation; in other words, identifying those organisations that have decided to walk the walk rather than talk the talk. BCG also theorized that the fall-away in innovation focus may partly be due to changing geopolitical and economic tensions.

But, crisis or not, how do leaders transform their organisations; moving them from passive deliverers of continuity into energised innovators? Leadership guru John C Maxwell said that “a leader is one who knows the way, goes the way and shows the way.” However, I would argue that there is a further step to be taken, that of ‘Owning’ the way. It’s a concept which I discussed briefly in my recent article “Changing the organisational climate for innovation to thrive.” In that article, I focused on the part played by middle management in helping innovation live and breath across an organisation. I also introduced the ‘Own-Drive-Contribute’ framework; demonstrating how innovation can thrive when leaders ‘own’ innovation in line with the purpose and strategy so that managers can ‘drive’ innovation on a day-to-day basis, enabling people to ‘contribute’ to innovation freely. 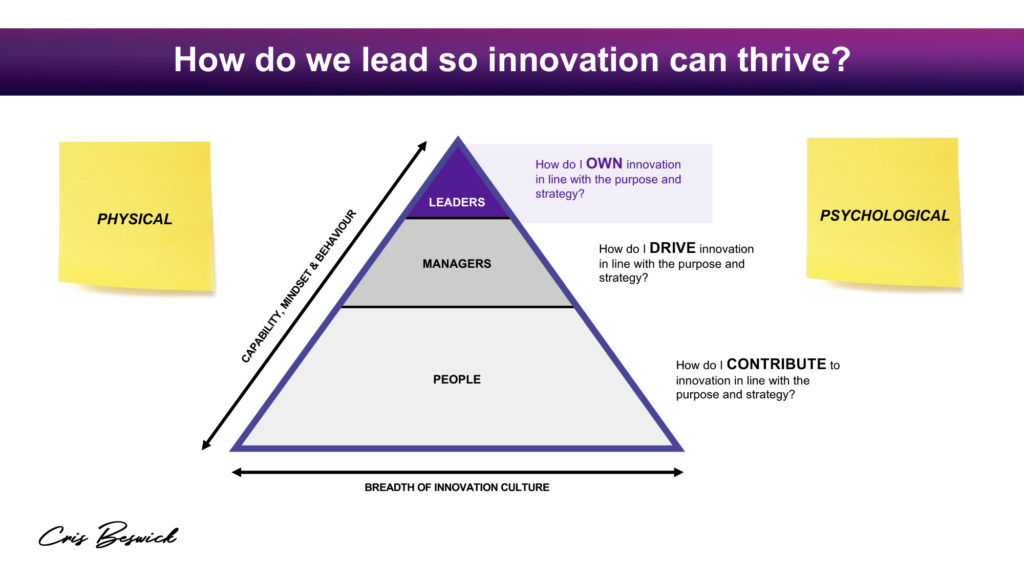 So how do leaders own innovation? What physical and psychological components do they need to focus on to create an organisation-wide innovation ecosystem?

Let’s start with one of the critical physical components; the innovation strategy. It goes without saying that you need a strategic approach if you want to deliver innovation, and indeed 42% of leaders say their confidence has grown over the last year when it comes to their belief that their company’s strategy and investment in innovation will enable it to remain competitive. [3] But it does have to be the right kind of innovation strategy, one which is fully integrated with the overall corporate strategy. Set the innovation strategy off to one side, and you might as well stick up a sign which says that innovation comes second to the main aims and values of the organisation. And when that happens, existing processes, short term targets, reward structures and so on will take precedence; effectively killing innovation efforts.

So well done to the 56% who say that their innovation team is entirely integrated or highly collaborative with their group strategy team. [3] But is that enough? How is the organisation translating that strategy into actions? As Steve Blank commented in an excellent article introducing the idea of the innovation stack; [4] when corporate processes funnel innovation into ‘demo days’ or ‘shark tanks’;

“without any measurable milestones to show evidence of the evolution of what the team has learned about the validity of the problem, customer needs, pivots, etc., the best presenter and flashiest demo usually win.”

Avoiding this scenario requires the setting up of defined venture boards and a proper system of innovation accounting which measures and manages innovation processes; identifying and dropping unviable ideas whilst providing the necessary budget and infrastructure for those which have the potential to deliver change. These may help organisations to overcome some of the top innovation barriers such as measurement issues, talent shortages, technology and budget.

However, putting the physical infrastructure in place is only one aspect of moving the organisation towards an embedded culture of innovation. When the top innovation barrier is organisational resistance to risk [5] then going, showing and owning the way comes into play. Quite simply if you are serious about transforming culture, you can’t afford to pay lip service to innovation.

One of the questions which the authors of the McKinsey article [1] suggest CEOs ask themselves is ‘what beliefs or long-held assumptions do I need to explicitly reset in the organisation and with stakeholders’ to achieve innovation aspirations. And that resetting encompasses multiple areas including attitude to risk, personal ego, and perception of failure, alongside individual traits including empathy and curiosity.

As an aside, how attitudes to risk and scenario planning are evolving are vital areas explored in the FRC financial reporting lab review announced on 10th September 2020. The study aims to identify how risks, uncertainties and scenarios are identified and reported on in the face of changes in the external business environment. [6] With company innovation efforts encompassing internal and external stakeholders, this review may highlight deficiencies, not only in reporting to stakeholders but also in communication and attitude; areas which impact corporate-wide innovation efforts.

Many of the changes mentioned above may have to be taken forward by middle managers, but they will only do so once leaders have signalled in no uncertain terms their determination to lead change. The adage ‘we want innovation, creativity, and new stuff but don’t forget to hit your targets by close of play on Friday’ has no place in an organisation where innovation is an imperative. Moreover, that viewpoint also illustrates the importance of seeing a move towards a focus on innovation as a chance to review and reset the target/reward matrix completely. When just 16% of total FTSE 350 annual bonus conditions positively encourage spending on innovation compared to 39%, which positively discourage it [7], then there is still something wrong with executive incentives. And when that attitude is reflected throughout an organisation, then there is little hope of innovation efforts having the priority they require to deliver success.

It is tough out there, but that is no reason to hunker down, especially given BCG comments that its research shows that;

“companies doubling down on innovation during downturns—using the opportunity to invest and position for the recovery—outperform over the long term.”

So, as a CEO or senior leader, where do you stand? If you are serious about the long-term future of your organisation, it’s time to step up and ‘OWN’ the innovation agenda.